Showing posts from January, 2018
Show all

TORONTO, ONT (February 2018) - In celebration of Black History Month, independent publishing company Kya Publishing is highlighting the black authors who have participated in their signature event--the Toronto Urban Book Expo--over the past four years. The Book Expo began in 2014 as a tribute to local writers and as an outlet for independent writers and self-published authors to promote, display, and sell their books. With an initial participant count of 8 vendors, Kya Publishing has seen author interest and international attendance grow steadily over the years. Since the inaugural Toronto Urban Book Expo during the Toronto Public Library's Black History Month program in February of 2014, there have been approximately 70 writers who have honoured the Kya Publishing event with their presence. "As we approach the fifth annual Toronto Urban Book Expo, we want to thank all of the authors who have officially supported this event as vendors, hosts, speakers, and ambassadors,
1 comment
Read more 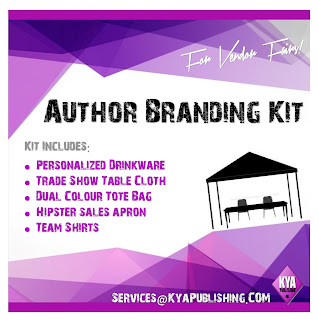 TORONTO, ONT (January 2018) Toronto-based independent publishing company Kya Publishing has just launched a new tool to assist authors with their vendor displays at book fairs, trade shows, special events, and for public sales opportunities. The Author Branding Kit contains personalized items to aide in presentation and marketing for authors on the go, integrating the author's logo, name, and preferred colours to create an original setup. "As we approach the fifth year of our Toronto Urban Book Expo, we appreciate how each author brings a unique presentation and style to their display table at our book fair, and other similar events," said Kya Publishing's Stacey Marie Robinson. "We've put together a great package where new authors--or veteran marketers--can get the basics for their vendor setup in one convenient location." Items in the kit include: -Personalized Drinkware (water bottles/cups/mugs/glasses) -Trade Show Table Cloth (suitable for 1
Post a Comment
Read more
More posts